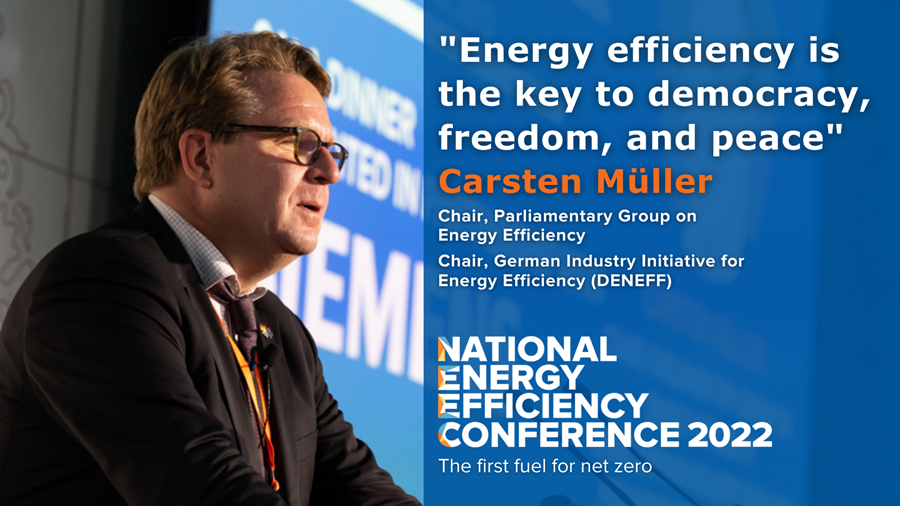 The 2022 National Energy Efficiency Conference wrapped up on Thursday after two full days of the latest insights from our incredible lineup of speakers, and enthusiastic reunions of the energy efficiency tribe in the breaks. The EEC team was delighted to welcome well over 300 delegates back in person, and we hope everyone that attended found it as rewarding as we did.

The first fuel for net zero

This year's theme was energy efficiency as the first fuel for net zero, and appropriately so, as this was the first time we had met together in since Australia fully committed to achieving net zero emissions by 2050. Opening the Conference, Minister Lily D’Ambrosio reinforced and recommitted Victoria to that goal, and expressed optimism about what Victoria could achieve in partnership with the new Federal Government. 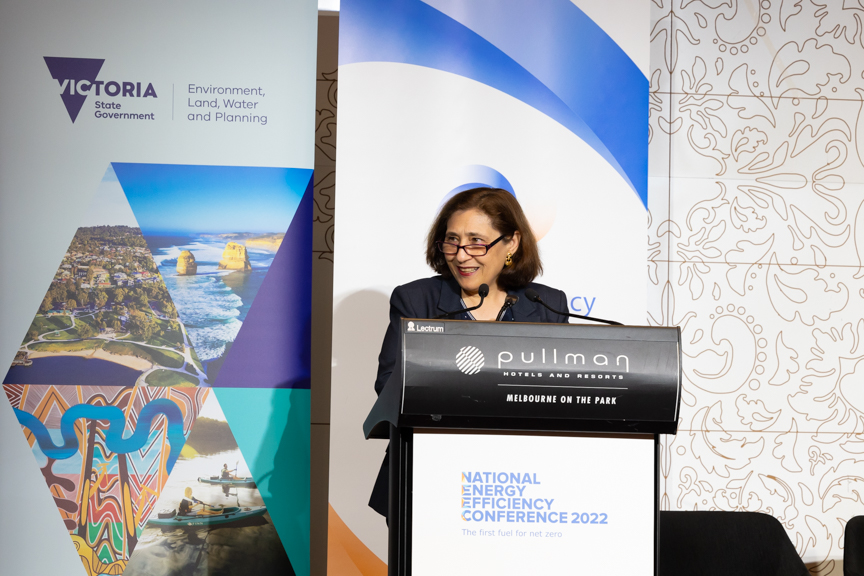 The international keynote delivered by Adrian Joyce – Director of the Renovate Europe campaign – stepped through that campaign's success in ensuring the benefits of retrofitting buildings resonate right across the political spectrum. Adrian told us how Renovate Europe’s simple goal – to reduce energy demand of the EU building stock by 80% by 2050 – has found traction with EU governments after a decade’s persistent advocacy.

In the subsequent panel discussion, Cassandra Goldie of ACOSS and Ken Morrison of the Property Council of Australia discussed the compelling case for retrofitting eight million homes in Australia to make them healthy, comfortable and climate-safe – with a strong focus on improving the worst-performing houses, often occupied by the most vulnerable in our community. 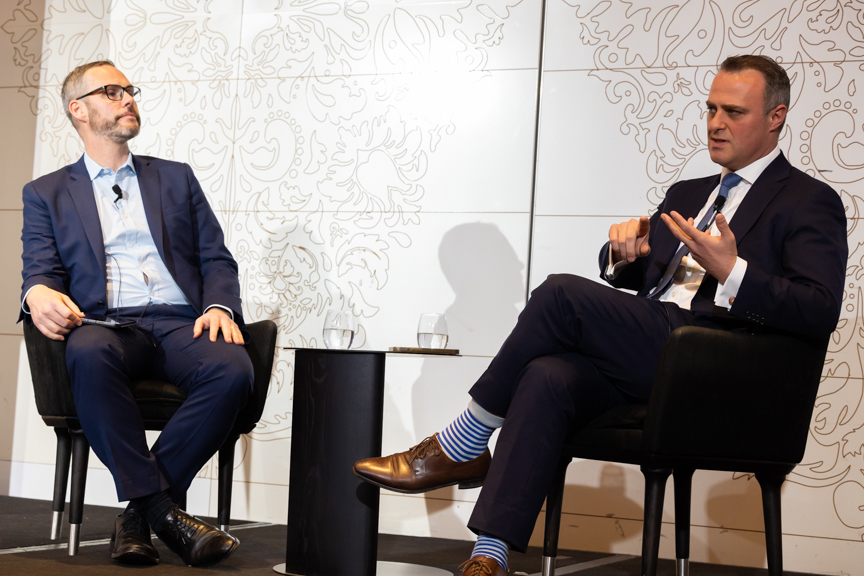 The future of gas – and what might replace it

The plenary session the emissions and economics of gas proved to be one of the more lively discussions of the conference. The International Energy Agency's Tim Goodson explained why global experts expect the role of gas to dramatically decrease by 2050. KPMG’s Tess Fitzgerald encouraged us to carefully examine the costs of various pathways away from gas, but also highlighted the need to invest in skills and supply chains around energy efficiency and electrification that are 'no regret'. And DELWP’s Ralph Griffiths highlighted that governments are already thinking carefully about how to support consumers through a transition away from gas that is already gathering pace.

ACT Minister Shane Rattenbury told us about some of the ACT’s early challenges in the transition away from gas, and the importance of taking cultural norms and expectations into account. For example, consumers like 'cooking with gas', and many aren't yet acquainted with the wonders of induction cooktops!

In our session on translating net zero aspirations into action, Ian Learmonth of the CEFC expressed optimism that innovation would see hydrogen play a central role in  powering Australia’s future, while Heidi Lee of Beyond Zero Emissions thought that it would be a valuable but rare commodity with a crucial part in some economic sub-sectors. 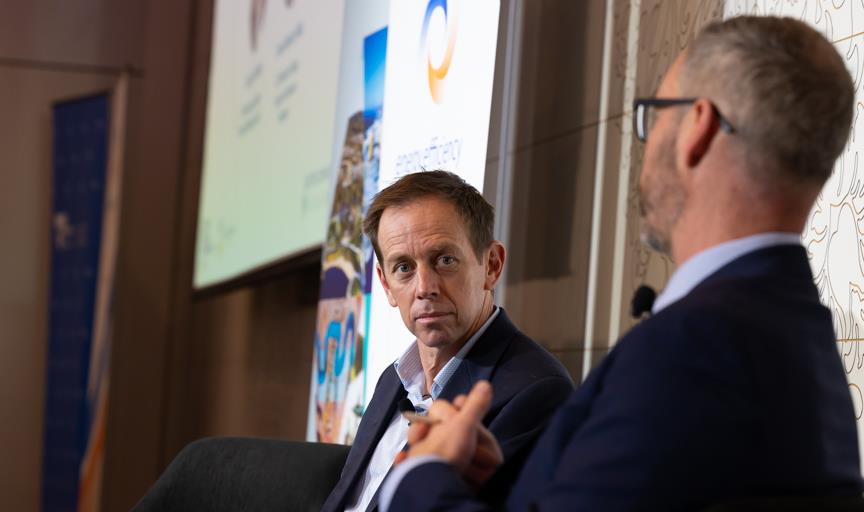 So having established what the challenges in the transition would be, a crucial question remained: who will build it? At the session on the future energy management workforce, Cathy McGowan of DISER reminded us that to build the new clean economy, we need the right people in the right place at the right time with the right skills – and for that, we needed a plan – which the forthcoming Australian Energy Employment Report will help us create. 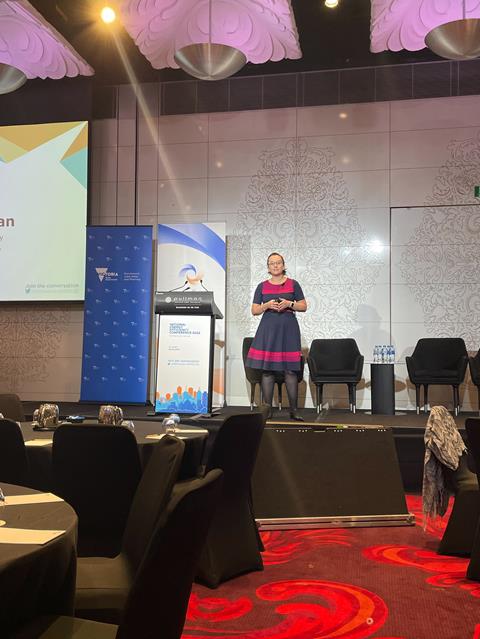 In picture: Manager of the Energy Strategic Policy section at the Department of Industry, Science, Energy and Resources, Cathy McGowan

EEC President Dr Mary Stewart spoke about the challenge of attracting and retaining staff – with some useful advice for the sector’s commitment to reach Equal by 30. EY’s Joel McInnes pointed out that in a full employment world, we’ll have to build – not buy – the skills we need – and keeping workers means getting real about flexibility. 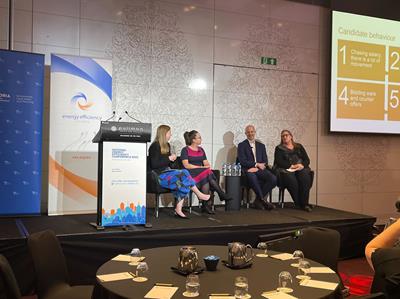 While we spent a lot of time discussing the future, we were also delighted to celebrate the past achievements of the winners of the National Energy Efficiency Awards – congratulations to all of our deserving winners. We were excited to help our good friends at NABERS launch their new global guide – do yourself a favour and check it out. The EEC team was also excited to help Siemens celebrate its 150th birthday in Australia at our gala dinner. 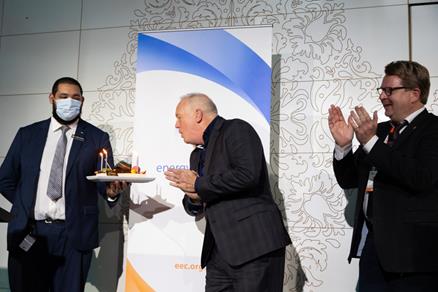 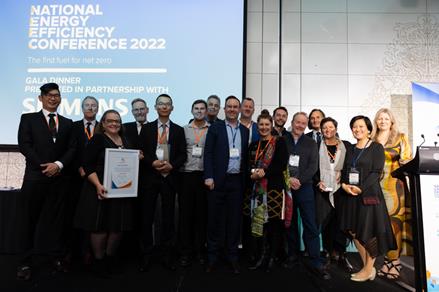 In picture: The winners of our National Energy Efficiency Awards

There was so much more, but you really had to be there. However, perhaps I might leave you with the most poignant moment of the conference in the speech delivered by Carsten Müller, member of the German Parliament. Reflecting on the intense energy security challenges being faced in Europe due to the war in Ukraine, Carsten highlighted the crucial role of energy efficiency in that conflict declaring that:

"Energy efficiency is the key to democracy, to freedom, and to peace.”