A global assessment of the energy efficiency of the world's biggest energy consumers has found Australia is a long way behind other industrialised countries.

The 2016 International Energy Efficiency Scorecard produced by respected US think tank the American Council for an Energy-Efficient Economy (ACEEE), ranked Australia 16 out of 23 countries in a comprehensive assessment that took into account both energy efficiency performance and policy settings. 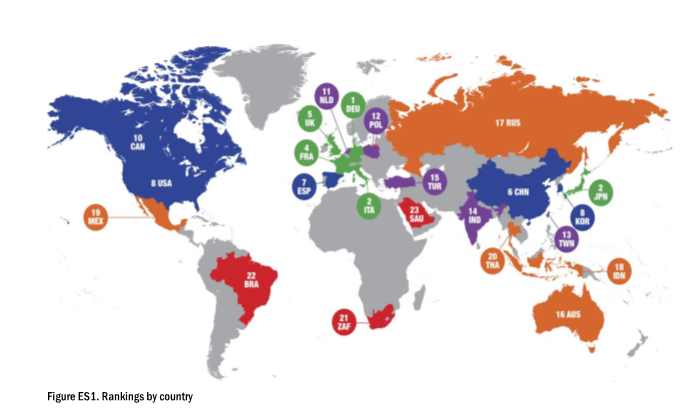 “Australia lags well behind other wealthy countries on energy efficiency, in fact we’re in the same group as Russia, Mexico, Indonesia and Thailand. Australia’s consistently poor rankings for smart energy use are a direct result of energy efficiency being an afterthought in our energy policy."

"Australia continues to fall behind while leaders like Germany take an integrated approach, investing in energy efficiency, battery storage and low carbon generation at the same time."

"Australia's performance on building efficiency is reasonable, ranking 9th out of 23 countries. This is due to sensible rules that protect businesses by requiring office owners to advertise how efficient their buildings are when they sell and lease them," says Mr. Menzel.

"However Australia's score for industrial energy efficiency is woeful; out of 23 nations Australia ranked 21st. Brazil, Mexico and Russia all performed better than Australia on industrial efficiency, and only South Africa and Saudi Arabia performed worse. "

“To deliver on this target the Minister will need to make serious reforms. I'm hopeful this terrible global ranking is the wake-up that prompts the energy sector to get behind the Minister.”

This week, the Energy Efficiency Council released the Australian Energy Efficiency Policy Handbook which aims to kick-start a discussion about the actions necessary to meet Australia’s energy productivity target, and sets out a suite of evidence-based recommendations.

“This week we released a comprehensive Handbook that sets out how Australia can get on track to meet its energy productivity target. We're looking forward to working with Minister Frydenberg to make Australia an energy efficiency leader,” Mr Menzel concludes.